Migrants In The Mara 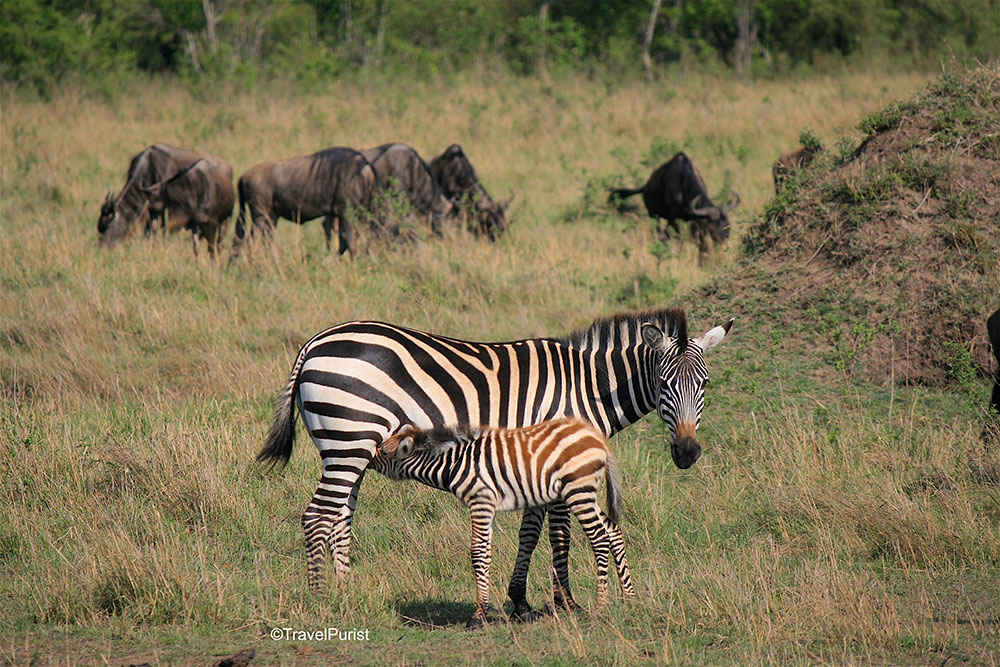 The Great Migration is just one of the many reasons to visit the Masai Mara Wildlife Reserve in Kenya.

It’s a good thing that migrants are welcome in the vast wildlife reserve of the Masai Mara in Kenya. For had that not been the case, the world would have missed out on one of the most incredible events on earth. The Great Migration – when over a million wildebeest make the treacherous journey from the Serengeti to the Masai Mara National Reserve in search of greener pastures – takes place in the months of June and July each year. Come October, their hunger and appetite for risk sated, the visitors return to their homeland.

Those lucky to have survived the famous crossing of the Mara River, graze in the lush grassland of the Mara; they also mate before turning back around mid-October when they queue up nicely to go home to the Serengeti and the Ngorongoro Crater in Tanzania where they will give birth to their calves. The wildebeest are not alone in their migration; with the zebras as their travel companions, the two species find safety in numbers and combine their skills in the common quest for food. The zebras possess a superior sense of direction while the wildebeest make for good water diviners. Not all of it is selfless service; the zebras are able to run faster, leaving the slower wildebeest as prey to the lions, in case of an attack.

The Masai Mara is thickly populated with over 60 species of mammals and 570 species of birds. Apart from the dramatic river crossing, it is the mission of most tourists to tick the ‘Big Five’ – lion, leopard, elephant, Cape buffalo and black rhinoceros – off their list. And yet, the Mara is worth a visit even for a languorous discovery of its less celebrated animals such as the topi, impala and hartebeest, or for the drama that is the courtship of its giraffes, for the herds of zebras that gallop alongside your vehicle kicking up the red dust of the Savannah, or for that serendipitous sighting of a cheetah with her cubs. The vast and open grasslands ensure that you will never return disappointed.

Don’t leave without partaking of the ancient wisdom of the bush. The Maasai or the people of the Savannah, regal in their traditional red attire called the shuka and beaded jewellery, are gracious hosts (just don’t photograph them without seeking their permission first). Their hospitality includes patiently answering questions about their pastoral life to showing you around their little village or Enkang, to offering visitors the fresh blood of a calf, and making sure that you go back home the richer for the experience. In fact, don’t leave without exploring the vast riches of the country – Amboseli and Tsavo national parks, Kenya’s less popular national parks located in the southern parts of the country, are no less magnificent (Amboseli affords beautiful views of Mount Kilimanjaro, Tsavo is known for its lions) while its beautiful lakes like Naivasha and Nakuru harbour a wealth of birdlife. There’s much to explore in Kenya and the Mara is only the beginning.

SCENES FROM THE MARA 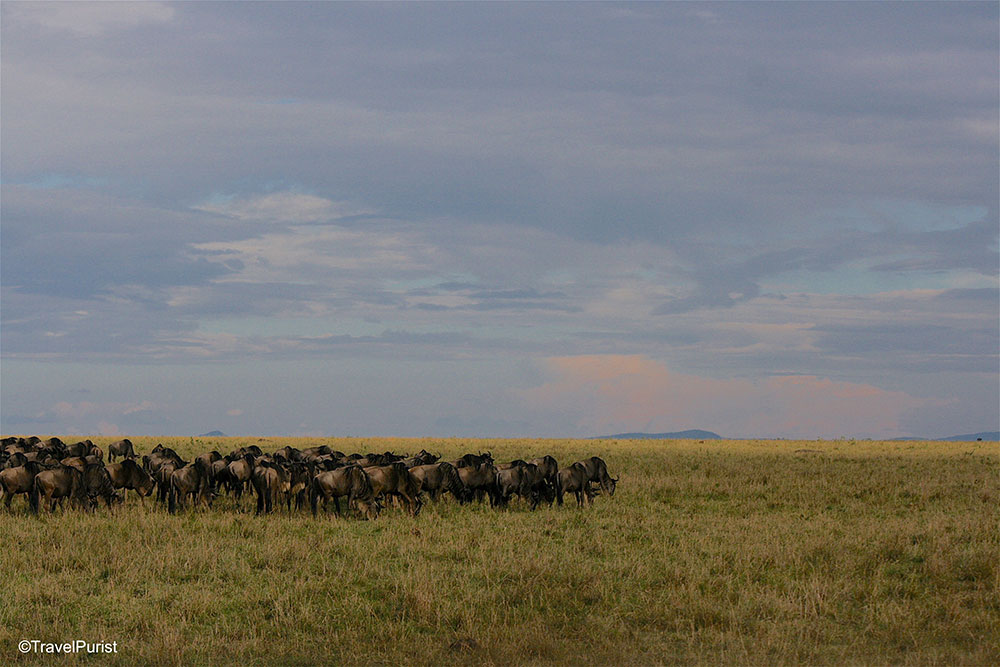 Homeward Bound
After three months in the grassland of the Masai Mara, this herd of wildebeest is already grazing its way back to the Serengeti. The wildebeest or gnu belong to the antelope family. The variety known as the ‘blue wildebeest’ is native to Kenya, Tanzania and other parts of Eastern and Southern Africa. 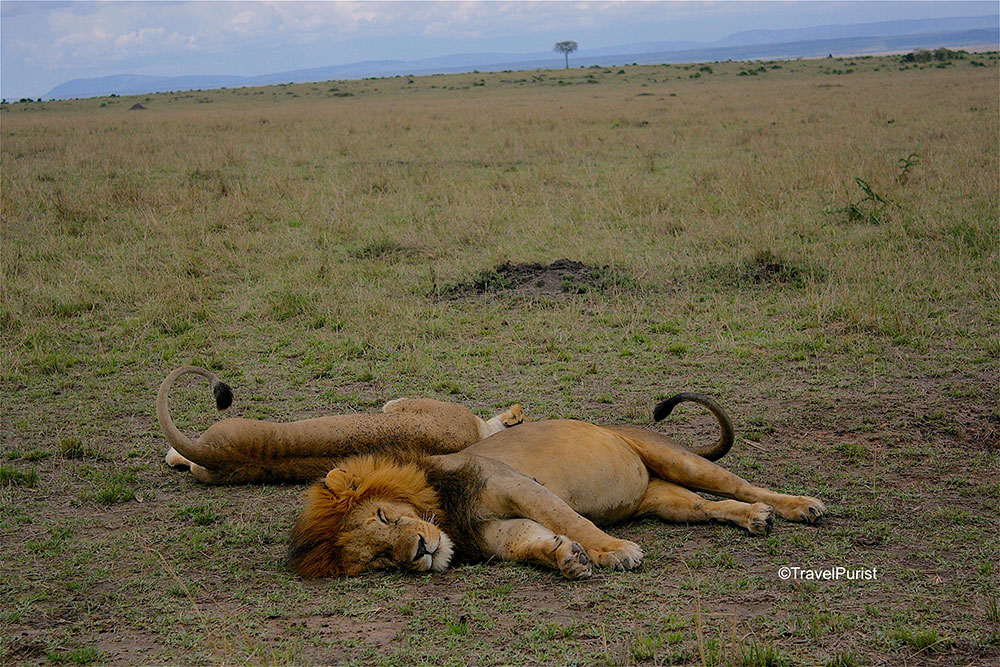 Catnap
African lions snooze after a heavy mid-day meal. Lions live in prides of about 15 to 20 that usually include three males. The lionesses hunt while the males protect the pride. Meals generally comprise wildebeest, zebras, buffalos or antelopes. 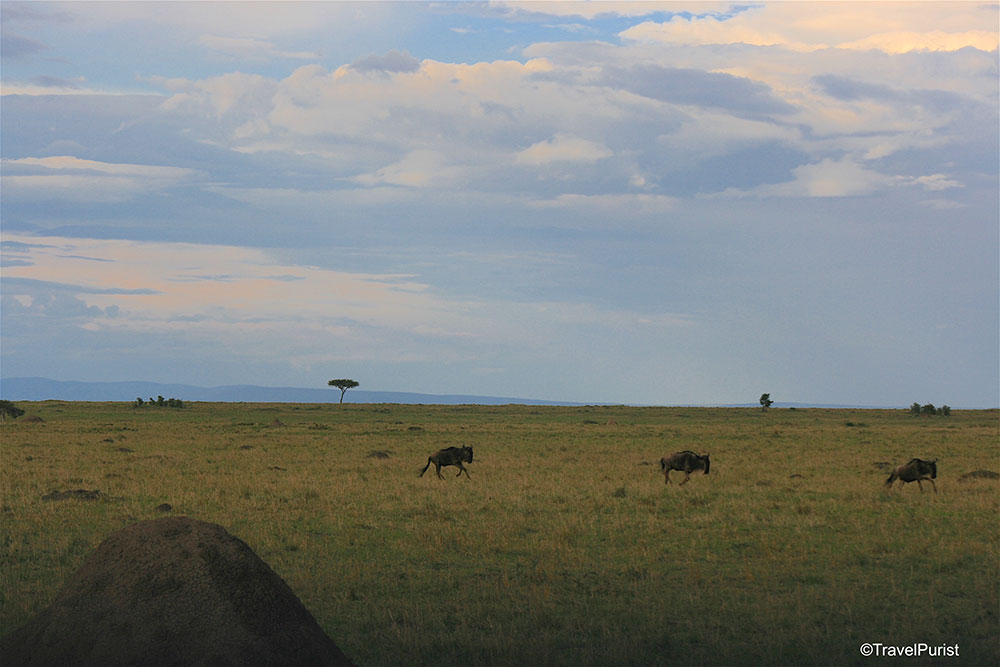 Single File
Wildebeest gallop in a line, in the direction of the Serengeti. 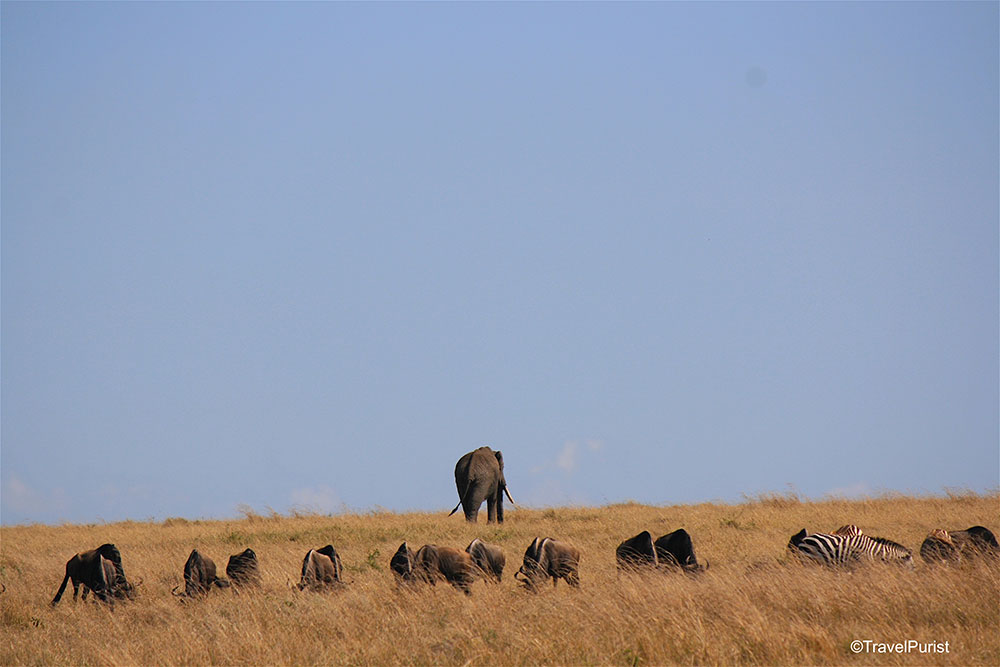 Straggler
An elephant separated from its herd looks over the horizon from amid grazing herds of wildebeest and zebras in the grassland. 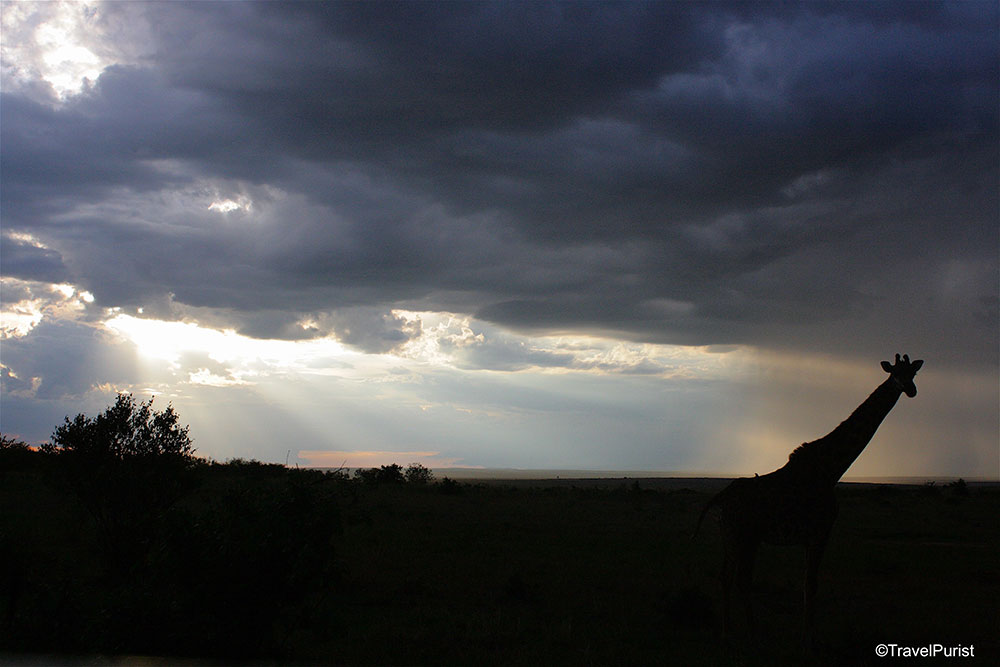 Head in the Clouds
A giraffe forms a silhouette against thunderclouds. 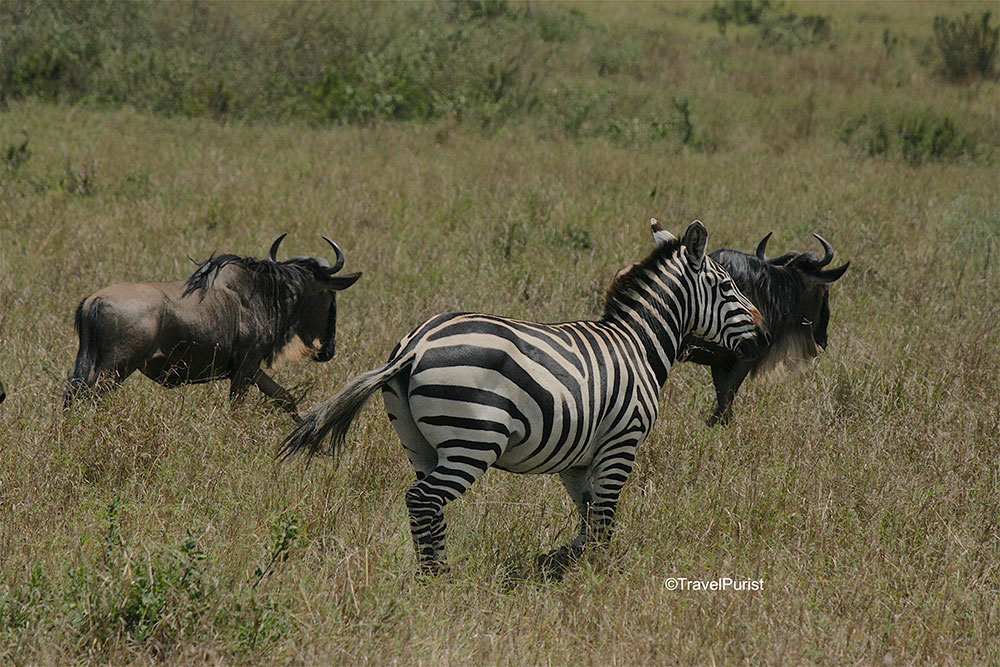 Travel Companions
Zebras and wildebeest find safety in numbers and combine their skills in the common quest for food. 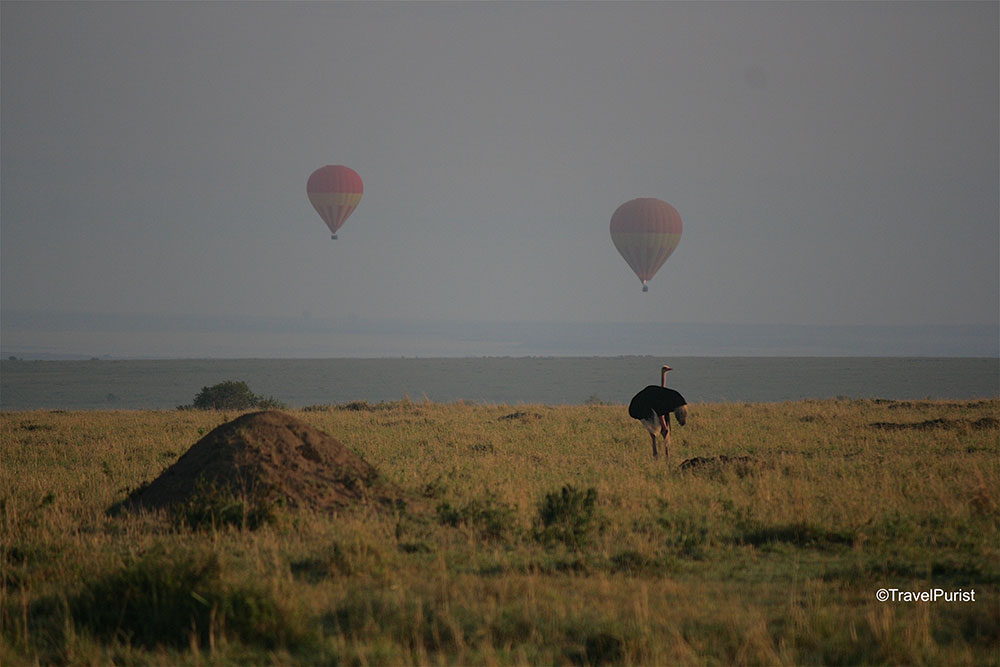 Flight
A flightless ostrich gazes longingly upon hot air balloons suspended in the open sky. The largest and heaviest of birds on our planet, its kick can kill even a lion. 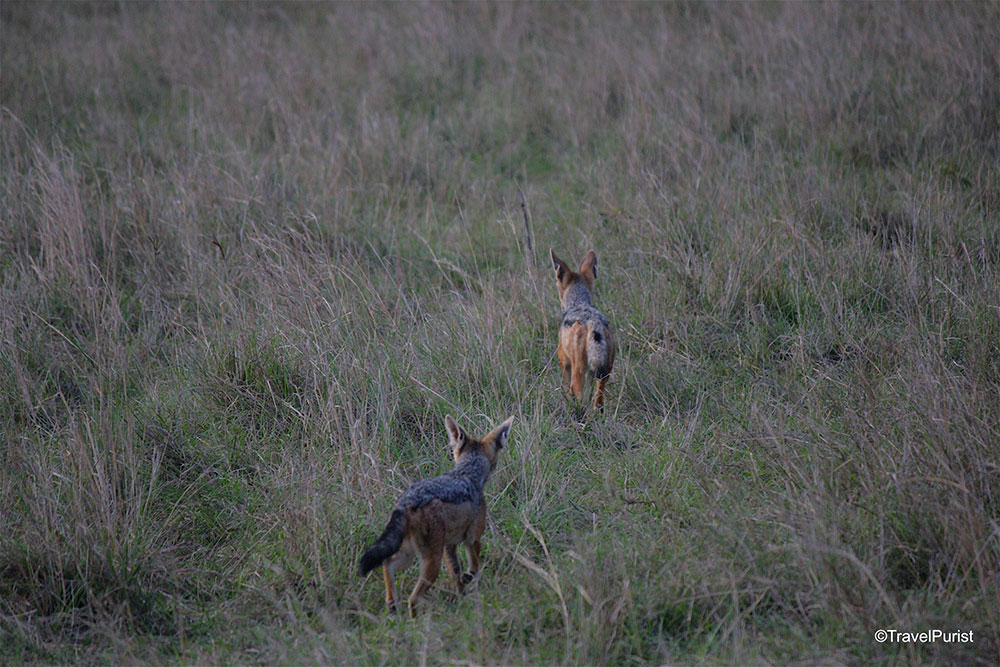 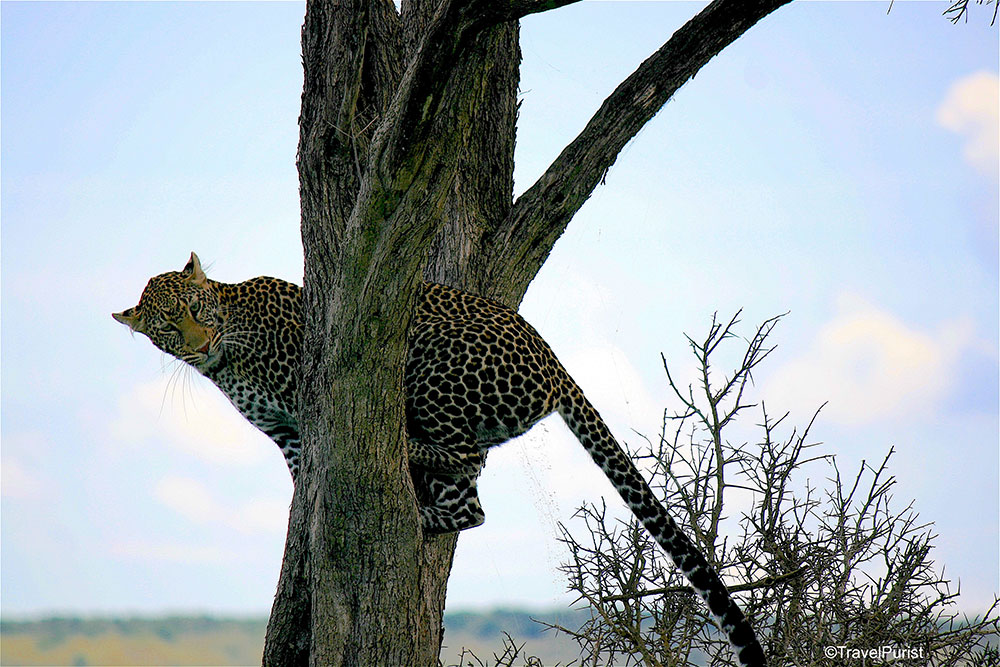 Spotted
Leopards are the strongest of the big cats, and are known to drag their kill up a tree to keep it from scavengers. They can carry an animal of their own weight up to the safety of a tree. 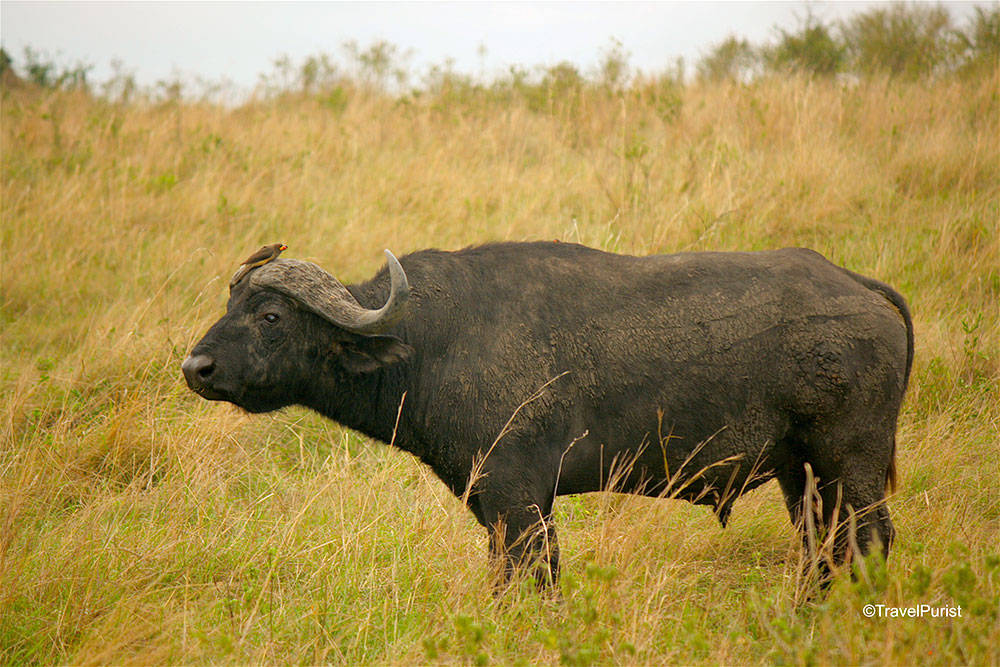 Friends
A Yellow-billed oxpecker perches atop a Cape Buffalo. The Cape Buffalo can weigh between 500-1000 kg and is capable of holding its own against a lion. The oxpecker is also known as the ‘tickbird’ as it feeds off ticks and other parasites found on the buffalo and other large animals. 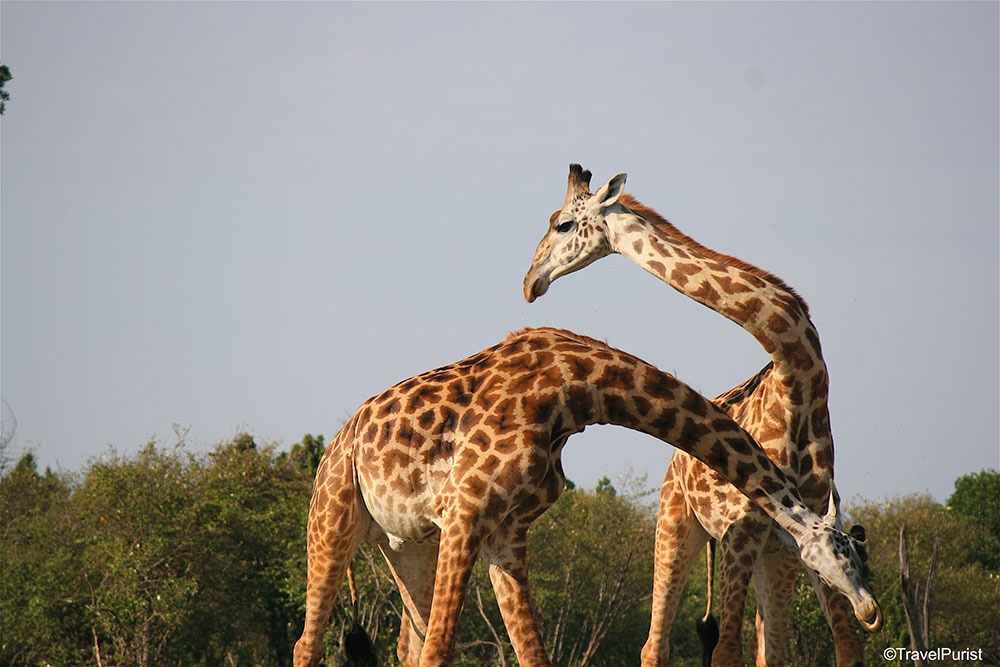 Neck to Neck
In giraffe love lingo, necking is not something indulged in by potential mates but, rather, by male rivals vying for the attention of a female. Male giraffes will have necking bouts to establish dominance. 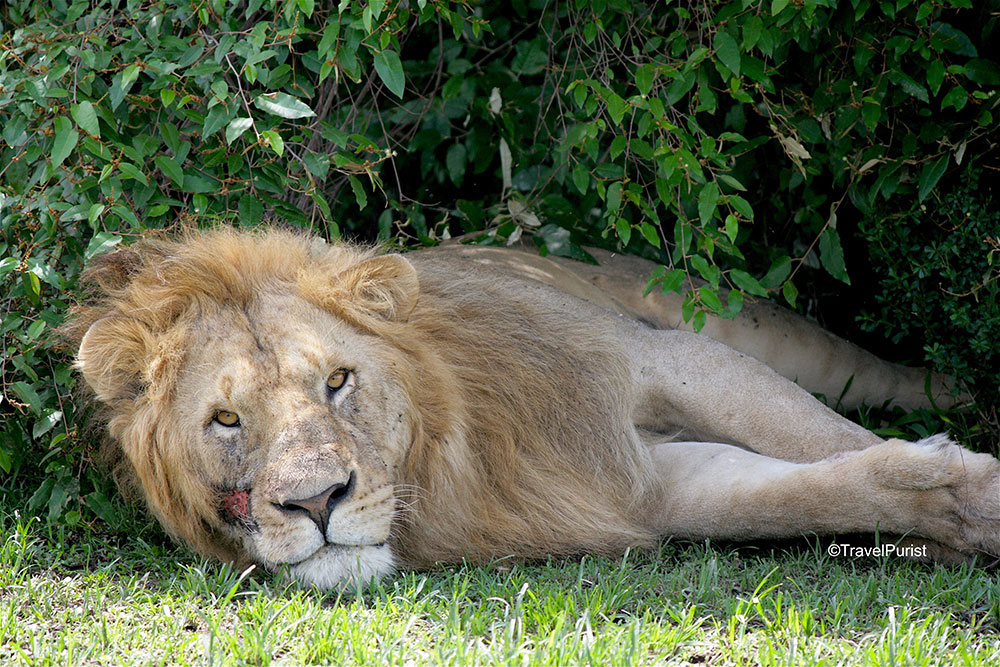 Scarface
A lion injured in a scuffle, most likely over territory, nurses his wound. Fights between lions can be vicious, and often result in death. Little Hunters
Cheetah cubs are born blind and are covered with a coat of fur called a mantle that serves as camouflage in the grass. Their colouring is more grey than tawny and their spots become bolder at about four months. The mantle is shed over a year and a half when the cheetah becomes an adult. 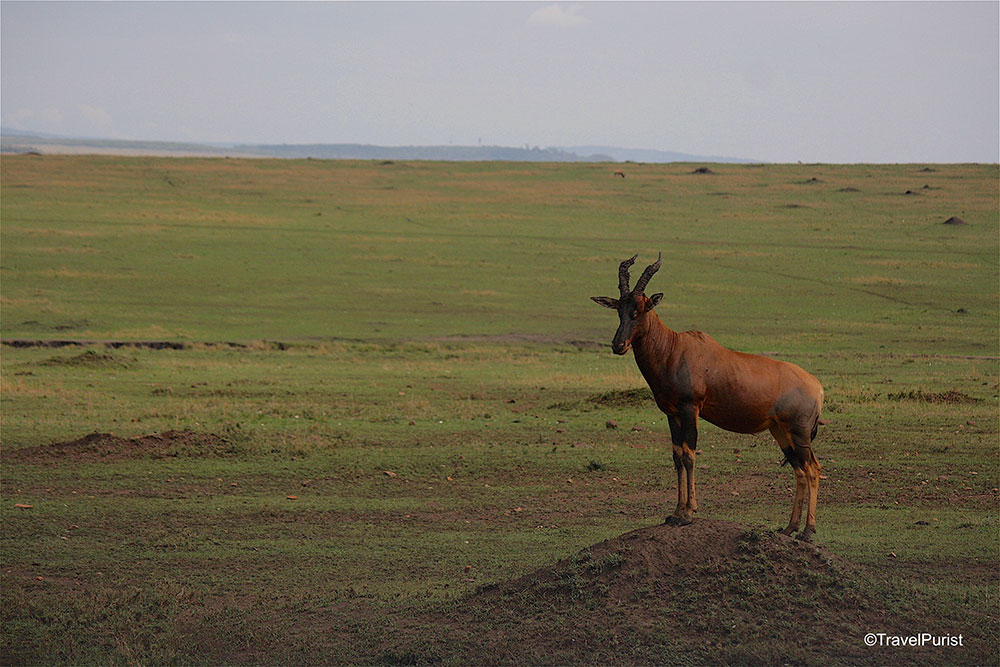 My Everest
A part of the antelope family, the topi is among the swiftest in Africa. Herds of topi migrate together with wildebeests, zebras and Thomson’s gazelles as part of the Great Migration. Here, a topi stands atop an anthill. An Honest Buck
A female waterbuck (a species of antelope) sticks her tongue out at the camera. Band Together
The Masai Mara is home to the banded mongoose, known to thrive in grasslands. These creatures feed on insects and live in colonies with a complex social structure. In Kenya, banded mongooses and warthogs come together for their mutual needs; the mongoose grooms the warthog by feeding off ticks and parasites on the latter’s skin. All Eyes
A group of hippos is known as a pod or more aptly, a bloat. These large riverine animals breathe every two or three minutes and are capable of sleeping when submerged underwater, surfacing up to breathe without waking up. Black and White
The white rhinoceros, distinguished from the black rhino by its long skull and square upper lip, was brought in from South Africa as part of conservation efforts. While it was saved from extinction – there are about 350 in Kenya – it remains endangered and vulnerable to poaching. Home
A Maasai tribesman stands within an enclosure called an Enkang. The Maasai live in dwellings made with wattle, cowdung, mud, grass, urine and ash. A tiny and poorly lit space with a smoky interior (owing to indoor cooking), the hut or manyatta houses an entire family. At night, cattle and other domestic animals are kept at the centre of the Enkang to protect them from predators. Warriors
The Maasai, now mainly herders, pride themselves as warriors and have elaborate rites of passage to manhood. Warriors may keep their hair long, in finely woven braids. The Maasai dress or shuka is usually bright red in colour while chequered and floral prints are also common. Both men and women wear the shuka and beaded jewellery. Jump, Dance
Singing and dancing are integral to Maasai culture. A lead singer is accompanied in chorus by his peers. Warriors also participate in a competitive ‘jumping dance’ called the adumu. Maasai take their jumping skills seriously; he who jumps the highest is chosen as the village chief and is popular with the ladies. Blush Horizon
Flamingos were once known to flock in the millions at Lake Nakuru, located within Lake Nakuru National Park in Kenya’s Rift Valley. Today, their numbers have declined greatly due to rising water levels, prompting them to migrate to other lakes. Pelican Brief
Lake Nakuru is home to over 450 species of birds and sees a number of migratory visitors. Colonies of Great White Pelicans arrive from Eurasia to feed on the bigger species of fish found in the waters of the lake.

Local Stars
Kenya is home to numerous species of African starlings like the Superb starling (left) and Ruppell’s starling (right).