Can Travel, Will Cook

A baker and film production designer based in Mumbai, India, Anuradha Shetty is a seasoned traveller. Having backpacked across the world, including a six-month-long couchsurfing sojourn across Latin America with her husband and then eleven year old son, travel remains the first among passions for Anu as she is known by friends and family. And yet, cooking has always been special. Be it family, her friends or fellow travellers across the world, Anuradha loves to cook for and with people.

While Anuradha has taken culinary courses in places like England and Italy, she also has stories of the countless lessons, big and small, imbibed from the kitchens of friends across Latin America, Europe and Asia. However, her travels have never been organised as exclusively culinary. “I don’t plan my travels around learning to cook, I like to learn to cook new things as I travel,” she says.

Travelling is how her curiosity of different cuisines and their cooking techniques finds spontaneous expression and engagement. She says, “I remember the first time I went to Italy. A friend’s step-mum had invited us over for dinner and I offered to help in the kitchen (as we do, being Indian).” What followed in the kitchen was the sight of an unforgettable array of pastas and salads, and a conversation where Anuradha was handed over Italian kitchen tricks by the mother. “I picked up little tips that you don’t get from a recipe. It’s just something you learn when you watch someone who’s made something a million times.”

Anuradha advises travelling chefs or food enthusiasts to be attentive in the little moments, when people—friends as well as teachers— pass on valuable kitchen hacks that no rulebook would. Whipping up a quick Sofrito. Scraping garlic pods into a paste with a simple butter knife or peeling ginger with a teaspoon; are all things she learnt in casual, kitchen conversations and demonstrations. “These are the little techniques that come in so handy when you’re cooking…something they won’t teach at Harvard,” she quips. 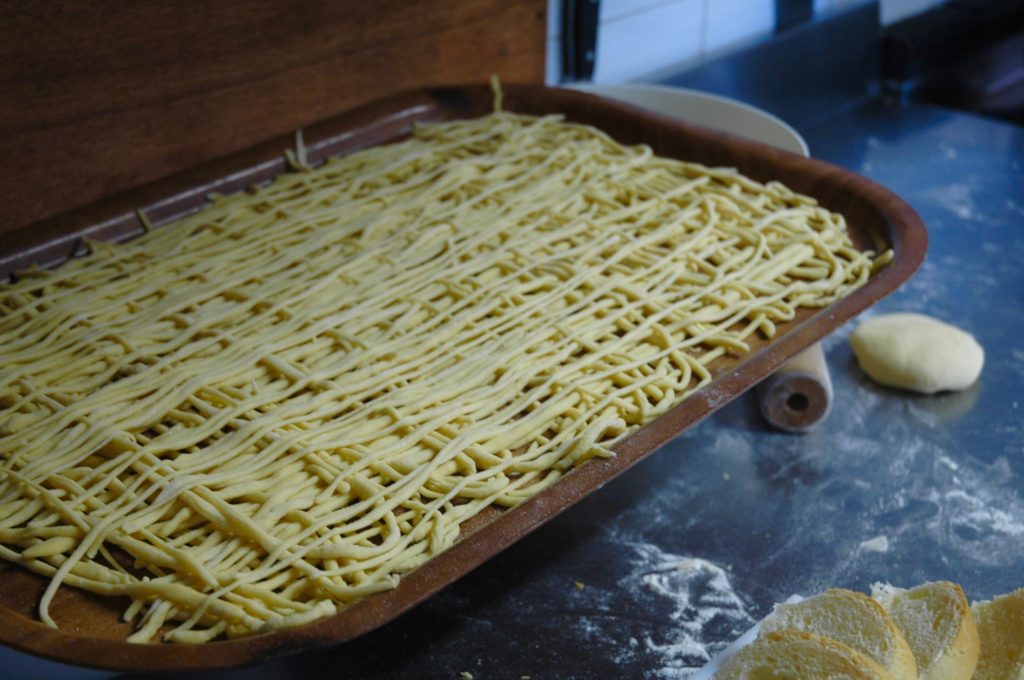 On another visit to Italy in 2006, Anuradha stayed in the Castello di Tornano, a castle in Tuscany where she undertook a three-day cooking course from their chef. A small class, it was a batch of three students who learnt from the chef, a range of Italian appetisers, mains and desserts. Recalling the making of Pici, a thick, hand-rolled Tuscan pasta, she says, “Making pasta dough is not very different from how we roll aata (wheatflour) in India. The techniques are definitely similar, but only the terminologies differ. Indians don’t use a set of grand terms to name and describe their cooking techniques!”

Complex terminology and fancy equipment do not affect Anuradha. Observing food and cooking across lands and cultures has made her sceptical about the so-called difficulty or simplicity of cuisines. In fact, certain dishes that appear simple are wondrously complex. Delhi’s Daulat ki Chaat, a type of streetfood in the Indian capital, is one of her favourites in this regard. “The chaat is sold in the streets and made with no great equipment. It is available only in winter, when there is the right amount of dew. It’s not in a fancy restaurant or made with things like whipping syphons—just whipped milk and cream, light as air, and it feels like eating a cloud…all made of practically nothing,” she marvels. 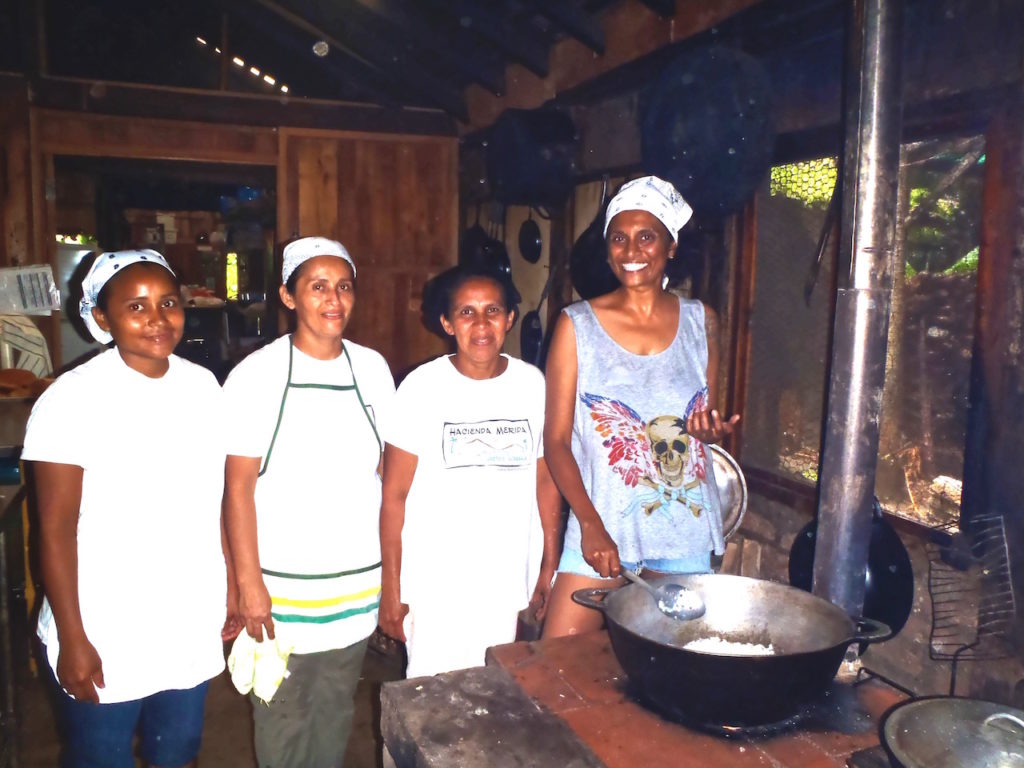 Anuradha, with the cooks of the hotel Hacienda Merida in Nicaragua

On a long stay in Latin America, in 2011, Anuradha spent six months travelling across and staying in nine countries in the region. Learning from fellow travellers in hostels and introducing them to Indian cuisine on her part is an experience she reminisces of fondly. During this journey, Anuradha prepared her special ‘kori gassi’ – a speciality of the Bunt community in the Mangalore region of South India – for her fellow travellers and friends she made along the way. The dish consists of a type of crisp, rice wafers called roti and a spicy, coconut-infused chicken curry called kori gassi. An interesting lesson here, was combining this South-Indian classic with ingredients available in countries like Peru and Brazil.

“Everywhere I went, I made the gassi. It was different everywhere because I didn’t have the rotis. So in some places I made it with rice, sometimes with roasted potatoes. I just adapted it to whatever was available there,” says Anuradha. She went on to use desiccated coconuts soaked in milk in the absence of coconuts, while during yet another cookout, she made the dish with Japanese sticky rice for a Japanese couple whom she had met over a meal. Another interesting combination was of the gassi with quinoa—an ingredient she came across in Buenos Aires when it wasn’t yet a world superfood. “So I improvised everywhere!” she laughs.

Through these kori gassi cookouts across Latin America, Anuradha learnt to marry her Mangalorean heritage with locally available ingredients from different geographical locations. Needless to say, the dish was a superhit among her non-Indian friends. “I have had many a meal with people across a table. But people that you’ve cooked for and who’ve cooked for you, you don’t forget easily,” she says, referring to her global food family. 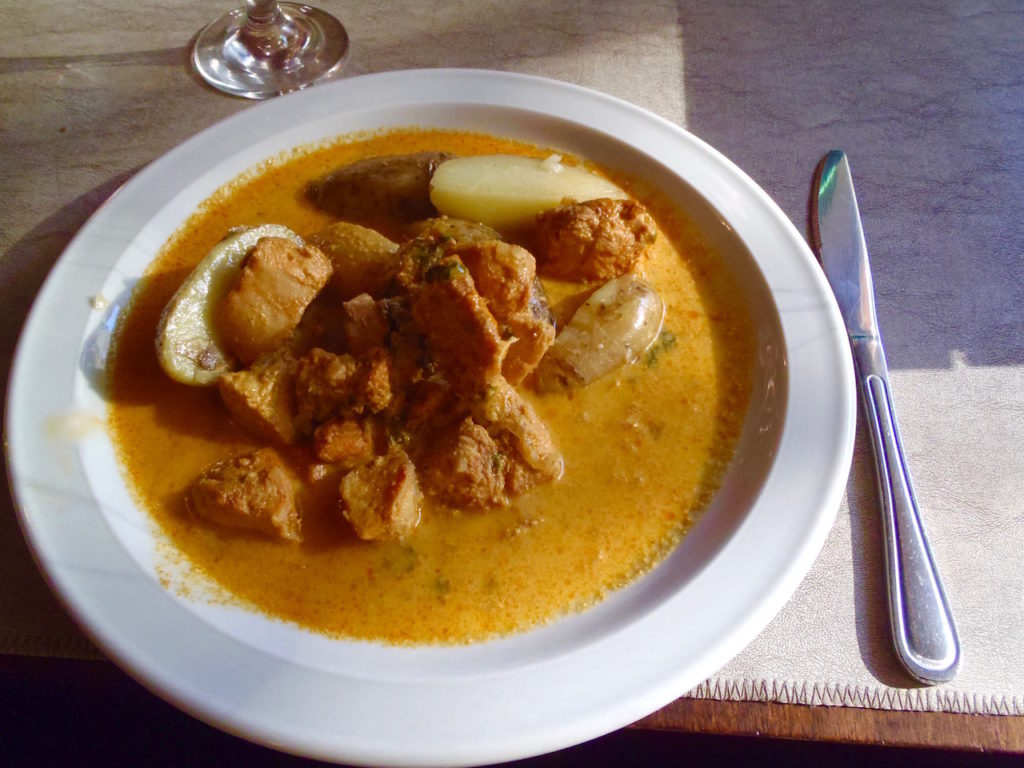 Anuradha’s Kori Gassi, made for a friend in Buenos Aires

While Anuradha loves cooking in informal spaces with friends and family, she has also undergone formal culinary training. On a trip to London in 2014, she took a three-month culinary course in the prestigious Leiths School of Food and Wine. It was a significant transition from home to a culinary classroom with a tutor. Was it difficult? “Not any more than working in a real kitchen,” she says, but adding that institutions only mean more things to remember, organise and follow, which can be challenging. A demand for exactness and precision can keep home chefs on their toes in institutional setups. “I bake and cook all the time, but it was different during the course. You have to plan a lot—there are time plans, then there are recipes which you have to break down and figure how much time they would take.” Being under constant surveillance can be also be new—“It can be tough if you are conscious of being watched every minute while cooking. I had never cooked in an environment where I was being watched and tested,” she says. 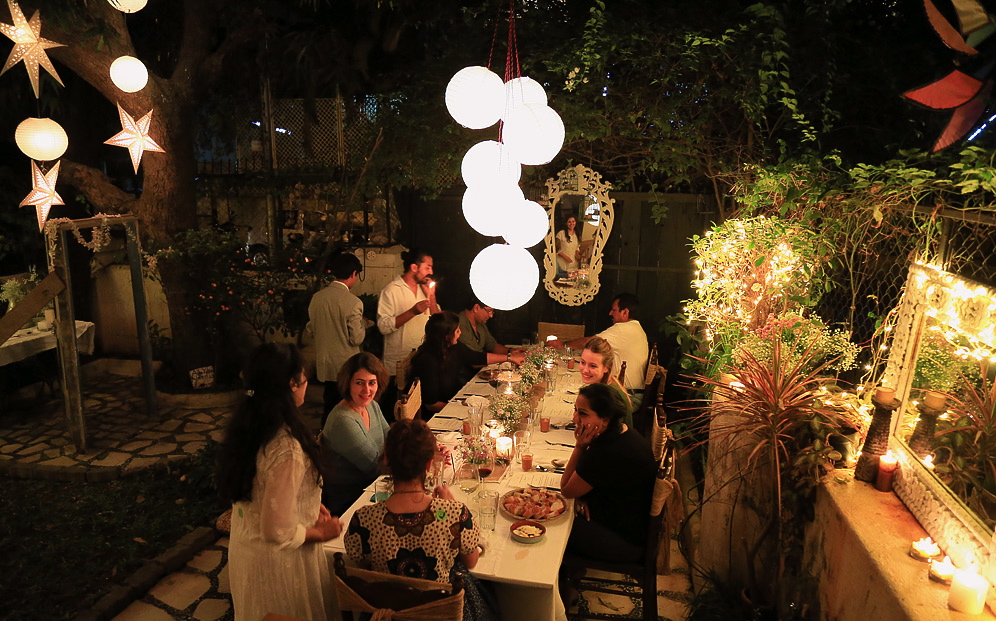 One of Anuradha’s sit-down dinners

It’s past midnight in India, and Anuradha is up baking a cake. She takes baking orders and also hosts sit-down dinners. “I’m working on something that will tie up my food and travels. But for now, I am all up for conducting bakery lessons for kids!” she says. In 2017, as production designer in the Bollywood film Chef (an official remake of the Hollywood film Chef by Jon Favreau), Shetty even organised the rebuilding of a food truck from scratch. Called the ‘Raasta Cafe’, the truck was a product of all the ideas she had gathered from her travels, and her notes on food-on-wheels concepts from around the world.

So what does she wish to tell people travelling to learn and learning to travel the world? “When I travel, the first thing I do is visit a local market. I love doing that, and walking around local neighbourhoods. Live with the locals and like a local. Learning through these interactions with the people and the place is so much better. It’s a total immersion. It’s better than doing touristy things where there is no osmosis or exchange.” 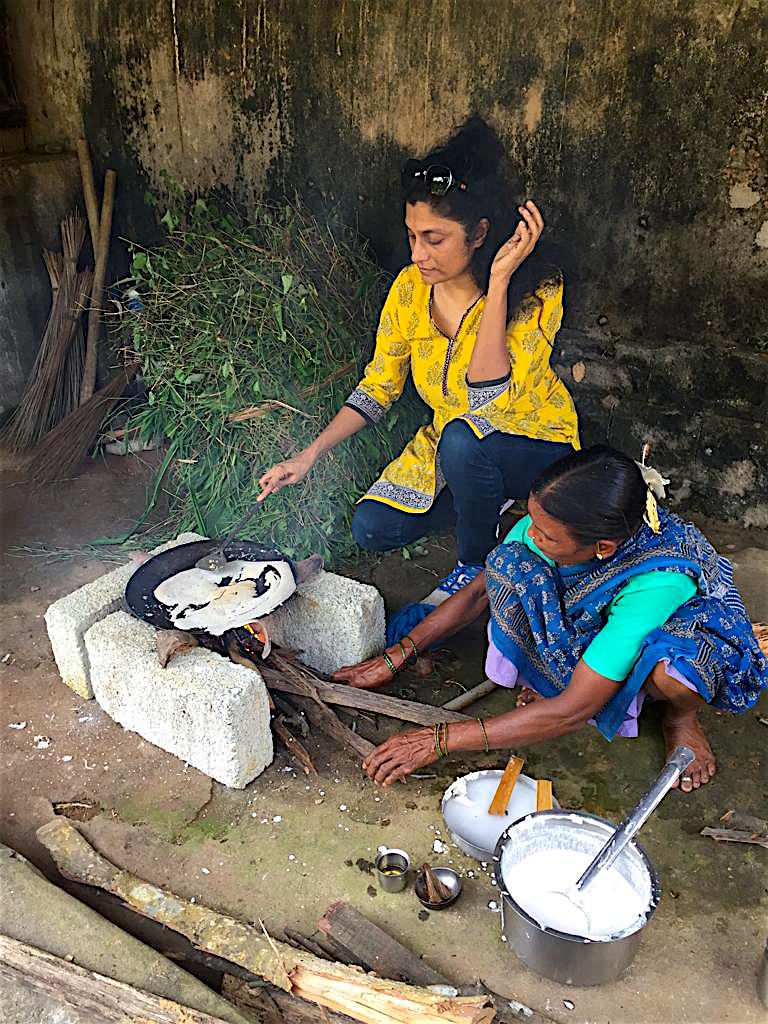 For Anuradha’s tips on making kori gassi and other dishes, email her at nubirdy@gmail.com. If you’re based in Mumbai, you could attend her tailormade cooking/ baking classes or place orders for her culinary treats.