The Long Road To Independence

As India celebrates 70 years of freedom from foreign rule, Travel Purist maps a few landmarks from the struggle. 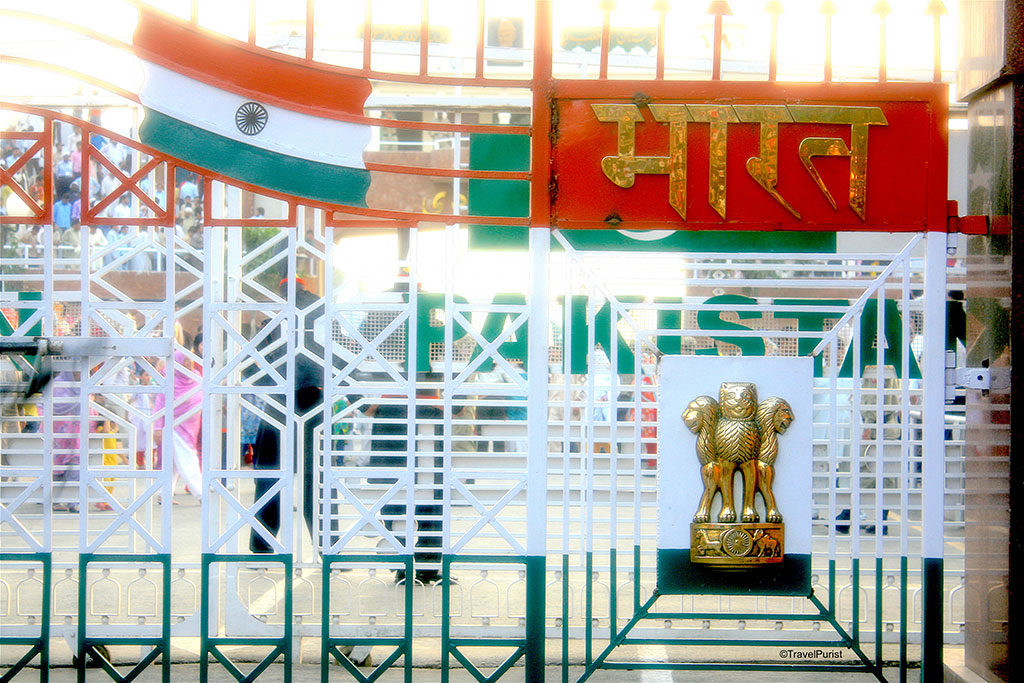 At the stroke of the midnight hour this August 15th 2017, India will awaken to 70 years of freedom. The hard-won largely non-violent struggle will forever be etched in world history as one-of-a-kind, led by a man who would be known by the world as the Mahatma. And yet, the seeds for independence were sown long before, by those who participated in the revolution of 1857 and by rulers of the southern kingdoms, such as Tipu Sultan. Participants of the movement included men, women and children, the rich and the poor, from across the length and the breadth of the country. Here’s a look at key places on the country’s map that bear testimony to this mammoth movement that also culminated in the Partition of India and the formation of Pakistan. 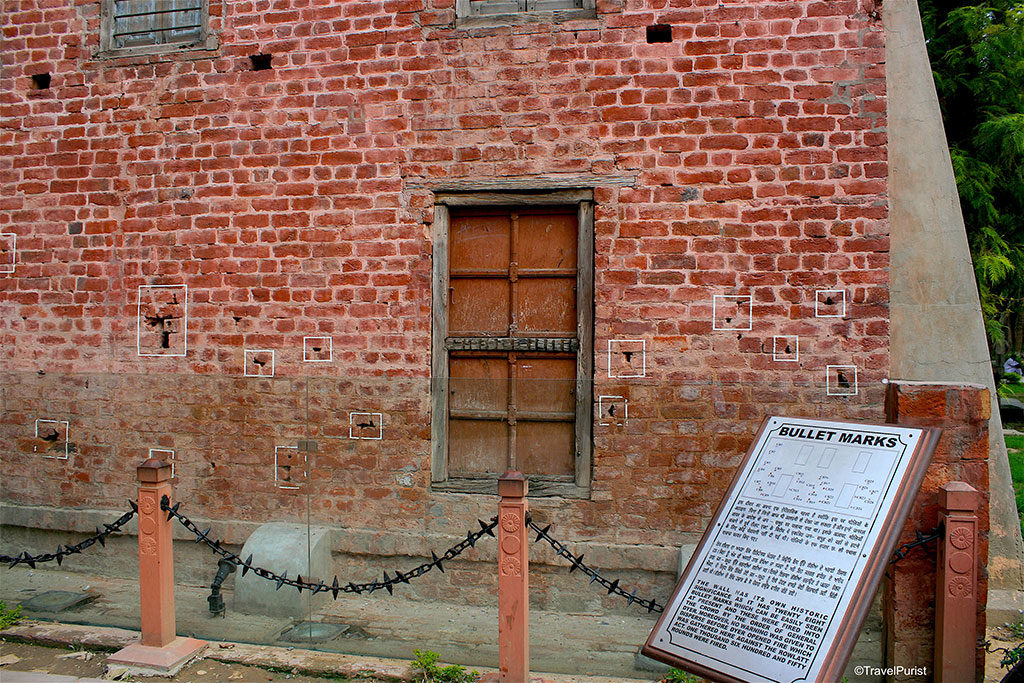 Among the places that bore the brunt of Independence, the city of Amritsar in the Indian state of Punjab was the site of one of the worst massacres in history. Jallianwala Bagh, an enclosed public garden, was the venue of a large gathering of about 15000 men, women and children on the occasion of the festival of Baisakhi on 13th April 1919. Those assembled there had also come to express solidarity with the leaders Satya Pal and Dr Saifuddin Kitchlew, in defiance of a curfew, when British troops under General Dyer locked the exit and opened fire, killing around 1000 people and injuring over 1500 of those trapped inside. Today, a museum and memorial mark the site that bears bullet holes from the tragedy, and the well in which many jumped to their death to avoid being shot at (many also died in the stampede that ensued). An eternal flame of remembrance and Martyrs’ Gallery are other sobering sights. 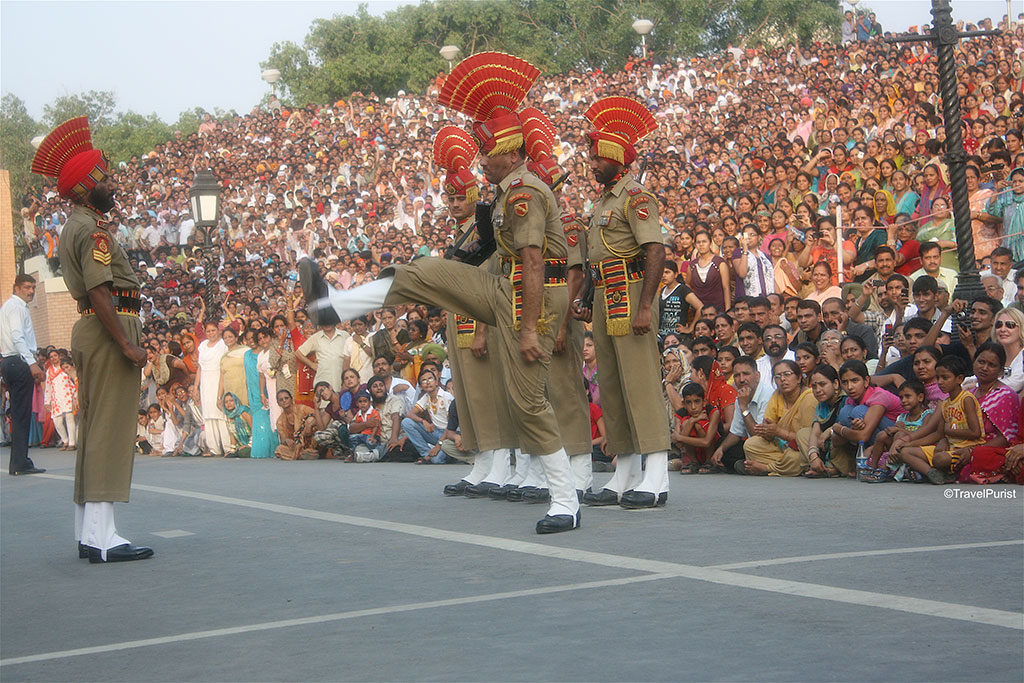 The Partition Museum and the Wagah Border (Amritsar)
Partition, Beating the Retreat Ceremony

Punjab, like the eastern state of Bengal was divided by the Partition of the country, and Amritsar, being merely 20 km from the border with Pakistan, was among the worst affected regions. The Radcliffe line, drawn by Sir Cyril Radcliffe, went through private farms and homes, rendering millions homeless overnight and uncertain if they lay in India or Pakistan. The Partition Museum was opened in October 2016 to commemorate the tragic exodus – believed to be the largest migration in recent history. Meanwhile, to see an exaggerated display of nationalism, visit the Wagah border near Amritsar to witness goose stepping soldiers from India and Pakistan in a beating the retreat and lowering of the flags ceremony every evening. 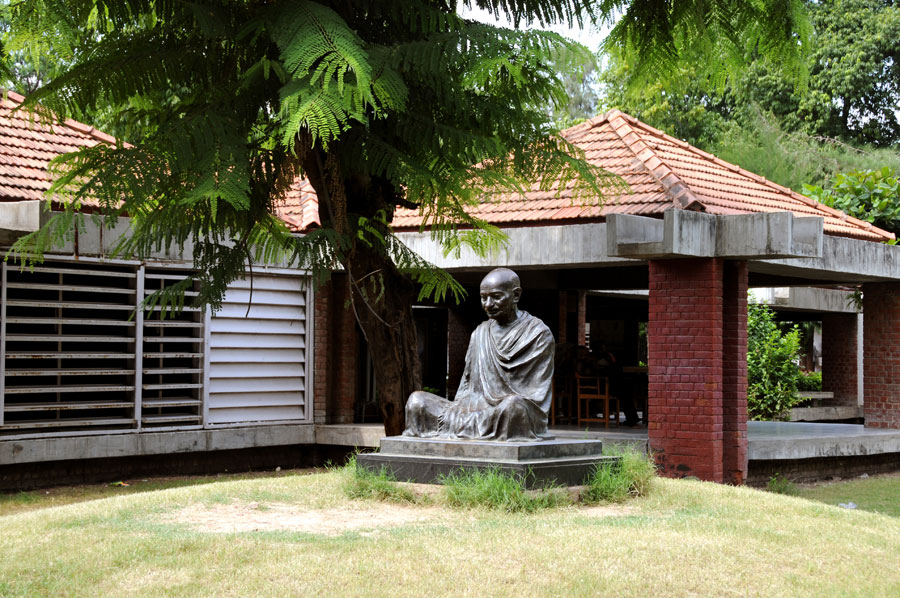 Previously known as the Satyagraha Ashram, the Gandhi Ashram at Sabarmati is located near the banks of the River Sabarmati and was one of the residences of India’s most revered figure. Not only did Mahatma Gandhi live here from 1917 to 1930, this is where he conducted his experiments in agriculture, animal husbandry and weaving of Khadi; the austere ashram reflects the simplicity that marked his ascetic lifestyle. This is also where he launched his famous Salt Satyagraha and began the march to Dandi in 1930 in defiance of the Salt tax imposed by the British government in India. Today, the ashram houses the Gandhi Memorial Museum (Gandhi Smarak Sangrahalaya) that has a comprehensive collection of manuscripts of Gandhi’s writings, his letters and some rare films among their archives, as well as a library, picture gallery and a slew of activities. The ashram also includes other cottages and buildings, including the home of Gandhi’s disciple Madeleine Slade who came to be known as Mirabehn.

Tucked inside a leafy lane named after the trees that contribute to its shade, Mani Bhavan, located on Mumbai’s Laburnum Road in the quiet Gamdevi area, is another former home of the Mahatma. Also known as the Mahatma Gandhi Museum, this is where he launched the Civil Disobedience Movement and asked Indians to embrace Khadi as well as Swadeshi goods. The two-storied building with its mosaic tiles and quaint wooden balconies houses the room occupied by Gandhi and displays his personal belongings (including his spinning wheels and bed). There is also an exhibition of rare photographs, letters and a diorama representation of his life. The library has a wide collection of books and visitors may buy Gandhi stamps, books and pamphlets at reasonable prices. 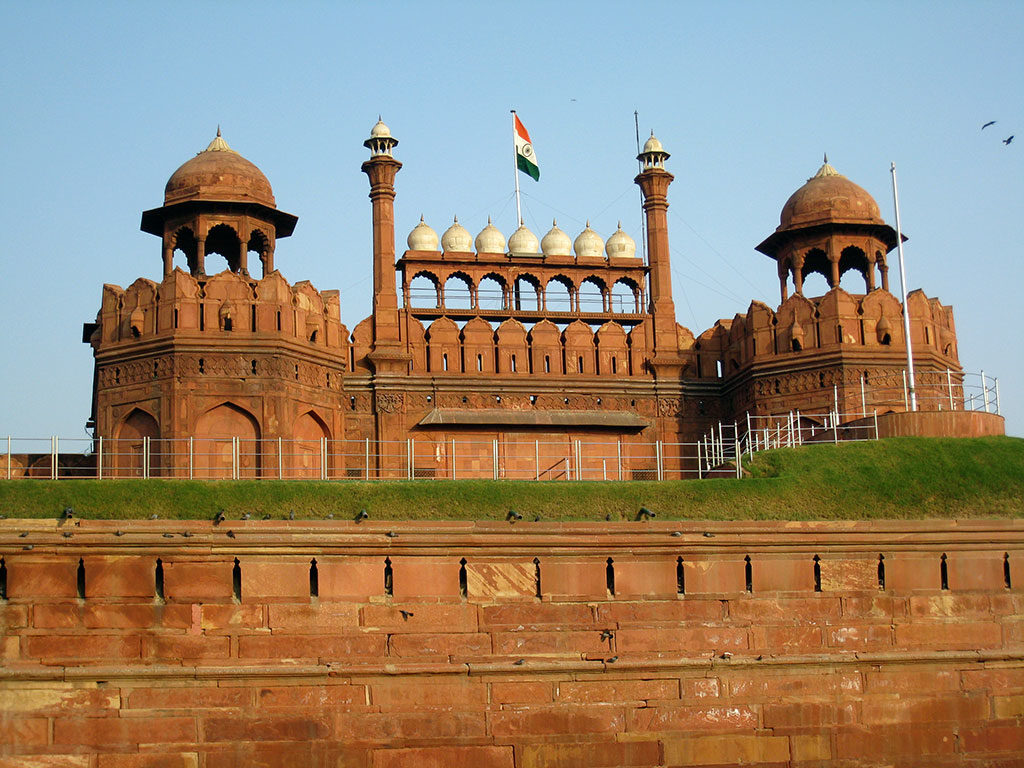 It was at the iconic Delhi landmark, the Red Fort, that the Indian flag was hoisted for the first time, the day after the transfer of power on 15th August 1947. After unfurling the flag and greeting the jubilant crowd assembled there with an emphatic ‘Jai Hind!’, Pandit Jawaharlal Nehru would deliver his first address as Prime Minister of the newly formed nation. However, the history of the fort goes back to the time of the Mughals and it served as the residence and administrative centre of several Mughal emperors for 200 years until 1857. A reminder, perhaps, that the idea of India has always been a fluid one and that its power centres (and therefore, cultural influences), have been many. Today, the Red Fort is a UNESCO World Heritage Site and houses several museums. In keeping with tradition, the Prime Minister hoists the Indian flag here on the 15th of August every year and makes a speech, followed by parades and Independence Day celebrations.

A nondescript old building in Mumbai’s crowded Crawford Market area, Sardar Gruha (located opposite the Police Commissioner’s office) is where the leader Bal Gangadhar Tilak (1856-1920) stayed during his visits to Mumbai. This is also where he died; Tilak’s funeral was among the largest in Indian history, attended by over 200,000 followers. Also known as Lokmanya Tilak (‘chosen or followed by the people’), he was the first to call for complete independence with Purna Swaraj or self-rule with the slogan “Swarajya is my birthright and I shall have it”. He founded the newspaper Kesari, which became the mouthpiece of the Independence movement (Kesari continues to be in circulation although in vastly diminished numbers). Today, the room that Tilak occupied in the erstwhile lodge houses the Kesari office. It retains its original look and feel to a great extent, partly due to neglect on the part of the government to preserve this as a heritage site. In comparison, the main office at the renovated Kesari Wada in Pune houses the shiny Tilak Museum.

Among the more radical leaders of the Independence Movement, Netaji Subhas Chandra Bose (1897-1945) was known to have escaped house arrest and fled to Germany where he sought the help of Hitler and Nazi Germany to overthrow British supremacy in India. Eventually, he struck a deal with the Japanese and assembled the INA (Indian National Army) with Indian POWs – Indian soldiers of the British army, captured by the Japanese during the Battle of Singapore. His end was as dramatic as his life as he simply disappeared into oblivion and is believed to have died in a plane crash although this theory is disputed. The house from which he escaped, the Bose family home, is now a museum that houses a research centre and displays photographs and other memorabilia from his life and times, including the car – a Wanderer – in which he escaped.

One of the most legendary figures in Indian history, Rani Laxmibai or the Rani of Jhansi (1828-1858) was a hero of the 1857 uprising (also known as India’s first war of Independence). Known to have led her forces in battle on horseback, wielding a sword with her young son strapped onto her back, stories of the queen are legion. She was the only woman to join leaders like Nanasaheb Peshwa and Tatya Tope, among others, in defending their kingdoms against the Doctrine of Lapse introduced by the ruling British East India Company, which demanded that rulers with adopted heirs forfeit their territories. Jhansi Fort was one of the sites of battle and came under siege from British troops. Today, the fort is a heritage attraction while the Rani Mahal, the Rani’s residence, is a museum. Besides Jhansi, the uprising spread from Meerut to Delhi, Kanpur, Lucknow, Gwalior, Indore, Punjab, Bihar and Bengal but was unsuccessful in overthrowing the rule of the Company.

Perhaps one of the earliest rulers to resist the forces of the British East India Company, well before India could even be considered a unified country, Tipu Sultan’s legacy lives on in Srirangapatna, on the outskirts of the city of Mysore in South India. The ruler of the kingdom of Mysore (he was known as the ‘Tiger of Mysore’), Tipu (1750-1799) resisted the siege of Srirangapatna in 1792 and 1799, in alliance with Napoleon and the French forces. While he had staved off the British in previous wars, he was captured and killed when defending his kingdom in 1799. Close to the ruins of the fort that Tipu died defending are his striking summer palace, set amid the beautiful Daria Daulat Gardens, and the Gumbaz, a mausoleum that houses his remains alongside those of his parents. 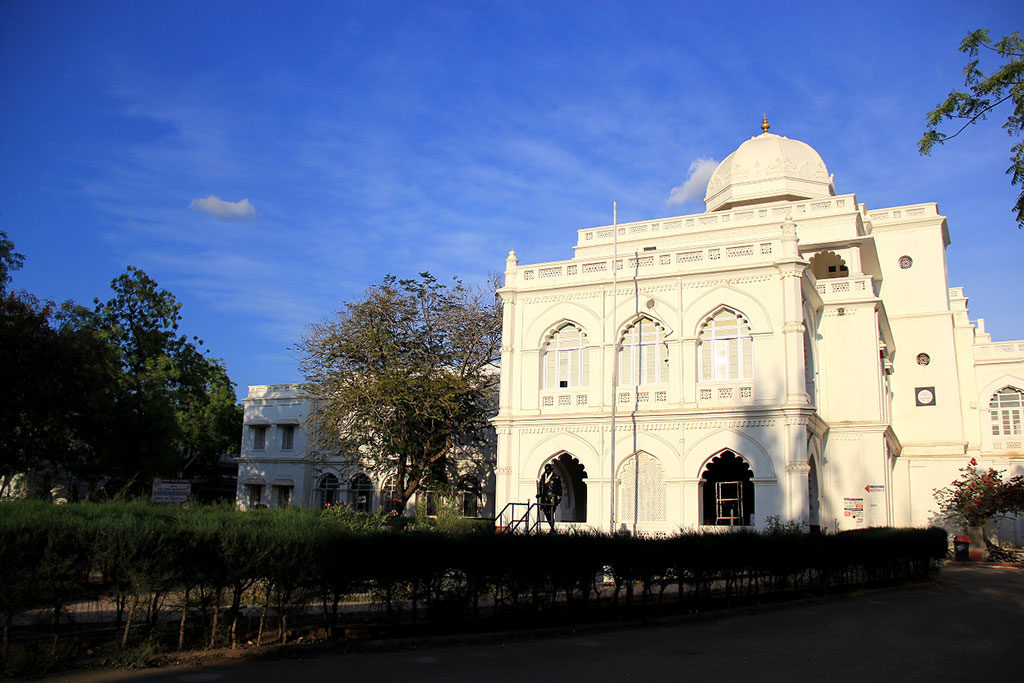 That South India’s participation in the freedom struggle has been undermined is a contentious topic. However, the Gandhi Memorial Museum in the city of Madurai in Tamil Nadu showcases the movement in the South, while highlighting the life of Gandhi. Housed in the erstwhile 17th century Tamukkam Palace, the museum showcases Gandhi memorabilia (including a blood stained cloth from his assassination) as well as Gandhi’s ties with the southern leaders, in the form of letters to Subramania Bharati and Narayan Sathsangi. The museum galleries trace the Independence Movement in the form of chronological events and include a section on Tamil freedom fighters. Interestingly, the museum also displays the various designs and versions of the Indian flag before the current design was decided upon.

Located on the Andaman and Nicobar Islands, remote and disconnected from the mainland, the dreaded Cellular Jail served as punishment of the worst kind to those imprisoned by the British government. Referred to as ‘Kala Pani’ (crossing the ‘black waters’ was considered taboo by Hindus at the time) by Indians, this is where political prisoners like Batukeshwar Dutt and the Savarkar brothers were placed in solitary confinement. Ironically, in 1942, the Islands were invaded by the Japanese and jail inmates included British prisoners until the end of World War II. Today, the jail is a national memorial.